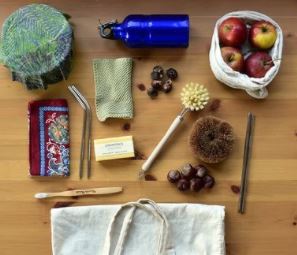 How do individuals choose to opt for zero waste? This is the question that Facebook groups make it possible to answer because they facilitate access to this ecological approach for people choosing concrete sustainable development activities as well as their questions and uses.  It is even possible to apprehend the next step in the change of habit.

Zero waste" groups are support groups and survey materials that borrow characteristics from communities of practice They enable practical surveys to be conducted. Zero waste groups function in the same way as collapse groups based on the theory of the collapse of capitalism in 2030.  The sociologist Cyprien Tasset, who has studied these groups, has shown that people will seek collective advice in order to overcome feelings of powerlessness and isolation. General groups resemble "self-help groups", described by T. Borkman. In these groups, people who face the same problem come together to solve it.

"The objective of zero waste groups is to facilitate access to information to democratize the process. It promotes benevolence without which nothing would be possible. It is one of the rules posted on these groups that takes on a political meaning because it encourages everyone to progress in the process", Solène explains. These groups take the form of self-help communities based on question-and-answer games. People who have become experts through their regular attendance at these groups and novices who clearly present themselves as such are exchanged on these groups.  These communities of practice make it possible to be a support of surveys for these Internet users.

Internet users learn by participating in lively discussions. The most active groups post up to 300 discussions per day. Individuals take charge of their learning by deploying two types of strategies: either by searching for specific information by typing keywords into the search engine, or by taking an interest in the process by looking at the news feed from which ideas will emerge.

Respondents strongly emphasized that they "were looking for what was right for them" and "what they could do. The principle of benevolence takes on a particularly strong meaning here because it is a question of respecting the multiple choices of each person. There is not just one path to zero waste, but multiple ways to get there. This respect for ways of doing things is essential to the smooth running of the group. On the one hand, the questioners detail the information sought and on the other hand, the participants give the keys to understanding their experiences.

The comments fan out under the posts with many different solutions.  The questions rarely find a universal answer. Several hundreds of quite different comments can follow each other in a post before it closes. The contributions can be juxtaposed without prioritizing the proposed solutions.  It is impossible to know the solution chosen by the person who asked the question.

Experiences but especially experiments and solutions tested by Internet users are shared in these groups. "The group takes on the role of a laboratory in which it is possible to experiment, to manipulate even before being engaged in the activity. Web users can find out if the solutions recommended are suitable for them based on the feedback from people who have actually experienced these solutions" Solene insists. The whole point of the group is to be able to experiment in order to avoid wasting time, energy and resources. The Internet users who read the posts are already in a pre-experimentation phase.

"In contrast to Madeleine Akrich's research on communities of problems, capable of acting in front of or with experts, a collective of personalized experiences of laymen is created here. The personal experimentation of the members of the group allows each one to build up their own expertise and to know what they are ready to do" she compares.

"The information encountered on the group is considered with a critical eye but the verifications are not scientific. Very few research articles are cited about the group. The people who share their experience should not be laymen, professionals or extremists. The trust placed in the group is often tinged with mistrust, whereas trust in relatives is unconditional," she notes.

Some describe very lengthy surveys that go far beyond the group in seeking further information on the internet. This online experimentation also continues offline. Data is retrieved and information is cross-referenced, but above all, Internet users test the recommended solutions. The respondent often combines solutions proposed on the group and elsewhere.

"The survey carried out in the digital space is therefore not a simple arbitration but is built from successive evaluations and devaluations," she concludes.

This seminar is organized around the social sciences (and digital), alternating presentations by social science researchers from Télécom Paris and other institutions on the plateau (on either side of the Nationale 118).