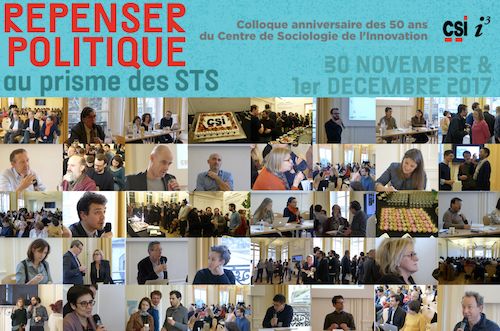 The Center for the Sociology of Innovation is 50 years old! In celebration of its 50th anniversary, the CSI organized a two-day colloquium on November 30th and December 1st. Since its foundation in 1967, the CSI has played a major role in the development of the field of Science and Technology Studies. The CSI has contributed to the analysis of innovation processes, the place of science and technology in society, the dynamics of the economy. This celebration of the CSI’s 50th anniversary is an opportunity to present and debate the research problems the CSI is currently dealing with. Together with external personalities, the researchers and the PhD students of the CSI invite you to explore 6 contemporary problems through the lens of STS.

1. Acting at the borders

How to sharpen our eyes on the so-called global problems: poverty, migration, conflicts, development, humanitarian emergency? Many analysts point to the recurring failure of policies to deal with these problems. But little attention has been given to politics, understood as action taken in situation with the actors concerned. In this session, representatives of Médecins Sans Frontières and of PEROU will thus demonstrate ways to rethink political based on actions taken in the areas in which they operate.

2. Turning the city into a laboratory ?</strong>

Whereas environmental issues become more pressing, what role are cities necessarily going to play in the energy transition? While pioneer researchers in Chicago have understood the city as our natural environment, several actors are busy today to make the city a permanent laboratory likely to reveal relevant or even optimal alternatives for the future. In order to extend the investigation, two main lines of inquiry will be favoured in this session: the city as an infrastructure and as an experimental site.

3. Making things and people count: mobilizing with and through data

The multiplication of alternative of production- and of data use initiatives, by actors who, until now, did not have this possibility, invites to relaunch the investigation on a with the STS consubstantial object. How do we deal with these data “from below”? Under what conditions do we make them exist? What policies do they equip? This session will take the form of three conversations between data producers who will present the main lines of their action, and researchers who will question what the emergence of these unpublished data can change to the areas of research in which they occur.

4. Clearing a way for law

How does the law make its way into our societies and participate in the constitution of our collectives? With a sharp glance at STS approaches, this session aims to question the materiality of law, its organization and its effects on reality. It is a question of bringing, from various objects and terrains, a renewed look to the service of an empirical approach of the “right in action”, apprehended in its plurality and indeterminacy.

How to envisage the investigation when it projects us towards the proper objects of a capitalistic configuration of the world? From which angle to approach the economic categories with which this world expresses itself? Based on questions raised in ongoing CSI doctoral research, François Vatin, Pascale Trompette and Michel Callon will try to address these issues in relation to key issues of our time (poverty, inequalities, and also transformations of power, of sovereignty, of global reports, reorientations of the sense of common good and of public service, increasing influence of the financial point of view, extensions of the problem of the risk).

6. Studying controversies: an exercise still up to date?

In STS approaches, controversy analysis is a central practice to understand the role of science and technology in society. It has irrigated research in this area and given rise to a very active educational tradition. How is the exercise transformed in an era marked by the rise of expertise, the trivialization of critics of the scientific institution, and the explosion of public debates on the Internet? We will bring here a double light: from a dialogue between practitioners of the teaching of controversial studies, and from a reflection on the approaches and tools of online monitoring.

Recording and photos of the session