« News archives
About the book : “What management means. A journey through the drifts and reinventions of contemporary business”. 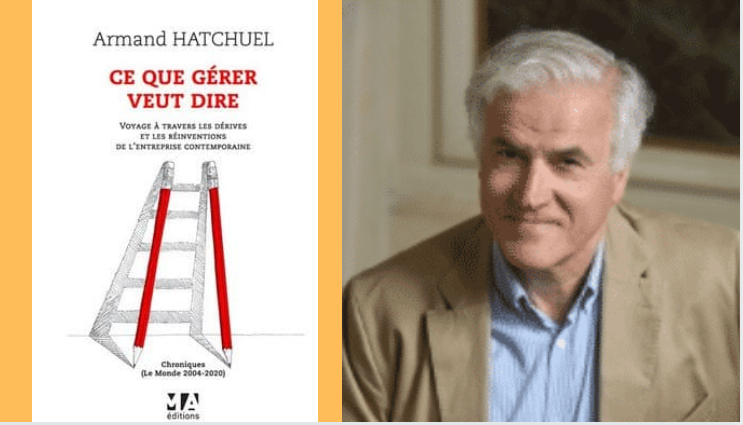 Professor at the CGS Mines ParisTech, Armand Hatchuel was a columnist for the Journal Le Monde from 2004 to 2020. He returned to the main themes of his 141 columns and the issues emerging in the early 2000s during a conference devoted to his latest book. (Excerpts)
The chronicle exercise is not new, there is a long tradition between chronicle and research, Stephen Jay Gould's "The Smile of the Flamingo" is the best known work in this field. For Armand Hatchuel, none of the columns he has written for Le Monde is a scientific article. "The column is a way of looking at what research says outside the traditional modes of expression. The column has been a companion to research. More than a simple exercise in popularization, the column has been both an exercise and a stimulation" he insists. The request was made to Armand Hatchuel by Antoine Reverchon, in charge of the economic columns in the "Ideas" section of Le Monde, who had the intuition that journalists did not know how to talk about companies. A. Reverchon wanted to "report on the management and life of companies in a more scientific, critical way, based on research, avoiding the "managerial" discourse.

The project was born in 2004, 17 years ago, in a not so distant time, but the world has been deeply transformed since then. The iPhone, Facebook, WhatApp, and even Uber did not exist then. The current intellectual, technical, social and anthropological infrastructure did not exist yet. In 2004, the internet had 800 million users, compared to 4 to 5 billion today. In 2004, Wikipedia published 300,000 articles for 6 million today. The human origin of the CO2 increase is a hypothesis that will only be confirmed in 2007 by the IPCC report.
Since 2004, companies have transformed the world as they had always done before. They have transformed civilization, not the economy but civilization. By transforming civilization, they are changing the economy and its very nature. As a researcher, Armand Hatchuel was more or less prepared for these changes. The design regimes, i.e. R&D, had begun in the 1990s. Thanks to the corpus of research, he was able to comment and react to all these events. "The very notion of organization, which was one of the cores of the theory of organizations in sociology, began to unravel, and fortunately we were able to understand the explosion of commerce and its most fundamental reference points," he says.

The chronicles have been a stimulation for A. Hatchuel. He was able to consult immediately a lot of data that was impossible to access quickly as a researcher. For example, the chronicle gave him the possibility to have the documents on the 2008 banking crisis, whereas as a researcher the use of these data requires a long validation process. The analysis of the literature (web) has also broadened his vision. He was also able to consult information on scandals, global drifts, national policies, Indian and Chinese lessons and comment on them.
Armand had qualified the chronicle as a companion of research because at certain moments "the world is too complex to be analyzed with long methods, we need to drill because it gives indications" he says.
In sixteen years, the 144 columns written address contemporary issues and challenges. They are divided into three categories: 65 concern "New regimes of innovation and design and Rationality and solidarity in the unknown", 59 are devoted to "Crises and refoundations of the enterprise" and 17 deal with "Historical perspectives and the contribution of management sciences".
The columns in the category "New regimes of innovation and design and Rationality and solidarity in the unknown" were inspired by the uncertainty of the future that was already very present in 2004. If the future is unknown, then what rationality are we talking about? It is necessary to create unexpected collective reference points, to think of rebuilding a relationship with gravity, to rebuild a relationship with intimacy as a regime of creation. How can we continue to think of work in the same way when the universe has changed? The notion of work must be thought of not as a flow but as a collective investment because we invent tools that provide work. Work is a process of investment (Chapter II On work as individual and collective investment). Still in the light of this corpus, public management is also innovative. Covid_19 has led to the development of new applications and new organizations (Chapter III Public management as a solidarity innovation).

Armand Hatchuel had not planned to work on the notion of the firm that was the inspiration for the columns in the "Crises and refoundations of the firm" section. The shareholder enterprise may seem like a pleonasm, but it is not. It is a cultural and theoretical transformation that took place between 1990 and 1991 and reflects, among other things, the takeover of certain management schools by mathematical economists. The irresponsibility of shareholding companies will be the cement of the scandals that will be the subject of chronicles.
As far as companies are concerned, there are little-known regimes of cooperation and coordination, which are the systems of manufacturing norms and modes of articulation of techniques. (Chapter VII The responsible company and its mission). For example, the company STMicroelectronics takes note of the fact that there is no possible direct governability of the specific creation process. The foundation of a company like STMicroelectronics implies reconstituting a learned society but without interdisciplinary limits. Furthermore, some companies ask employees to agree to a salary reduction in times of crisis for the sake of a good cause. This happened once in Germany, where salary cuts were accompanied by the distribution of shares. This means that the employees have created a solidarity committee investing in the company in the same way as the shareholders.
Work is an invariant. It exists only because each member of society contributes to it. Inventions contribute to create functions and consequently jobs. At the time of the 2017 election campaign, Benoît Hamon wanted to launch a debate on work. In a column, Armand Hatchuel pointed out that work must be examined in conjunction with two other terms: innovation and the nature of the firm. This debate with only the term work is not very useful.

The notion of the chief executive was also the subject of a chapter in the chronicles (chapter VI Les chefs d'entreprise: une autorité en quête de légitimation). In 1880, the chief executive officer was translated into English as "commis chargé des affaires" in French. He had a mandate because his mission was to manage operations. Today, the status of the chief executive officer has become almost enigmatic. He oscillates between the figure of a family man and the figure of a protector of business secrets. It is the same man, one is in the right and the second is not.

The category of "Historical perspectives and contribution of management sciences" has been the subject of columns, to a lesser extent, but also giving an unexpected light to management sciences. To return to the title of the book, it is inspired by a statement of the French Academy which, in 2011, warns against the abusive extension of the word manage. According to the academy, one should not say "manage one's divorce" or "manage one's doubts" but rather face a divorce or deal with one's doubts. The French academy wants to say that a divorce can only be lived in confrontation. However, managing a divorce is much more open. The stereotype is not always the most interesting. The word manage has a history. Modernity in a way has given us an abusive use of the word manage. Manage has taken on a broader, more open meaning.
The contemporary French use the word gérer like the emperor Augustus. The testament of the emperor Augustus "Res Gestæ Divi Augusti" posted throughout the empire tells us something that we have lost track of in French. Moïra Crete, a Latinist, has done some research and tells us that the similarity between agere, facere and genere has made us believe that these words were synonyms, whereas facere does not imply agere and genere does not imply facere and agere. The general "rem genere" does not act or take part in this matter but "guerit" it supports it. To support refers to a mixture of care, attention and solicitude. This construction expresses both a rational and a responsible action. It is very important because what founds modernity is the distinction between rationality and responsibility in a world in ultra fast transformation. The regimes of rationality and responsibility are constantly being reconciled, reconstructed, and the very foundation of modernity is semantics.
"To think about management sciences, we must go back to the starting point before Auguste Comte. We often forget that there are two types of enlightenment, that of the creative intelligence and that of the liberal enlightenment of Montesquieu. These two types of enlightenment divide the work and the only entities capable of coupling the two types of enlightenment are companies" concludes Armand Hatchuel.