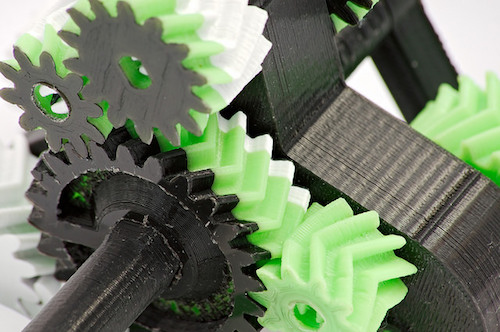 The potential economic impacts of 3D printing (or “additive manufacturing”) have attracted considerable attention in recent years. For example, in 2011 the publisher of Forbes predicted that 3D printing would become the “transformative technology of the 2015–2025 period” (Karlgraad, 2011). Likewise, the editor of Wired forecasted that the “desktop manufacturing revolution [would] change the world as much as the personal computer did” (Anderson, 2012). 3D printing is also acknowledged as a key component of the digitalization of manufacturing, sometimes also called Industry 4.0.

In the past decade, business researchers have highlighted the transformative effects of such digital fabrication technologies. For example, Ford and Despeisse (2016) concluded that 3D printing has the potential to enable sustainable manufacturing, hereby promoting the shift towards a circular economy (Despeisse et al., 2017) and reaching global sustainability (Gebler et al., 2014). Additive manufacturing creates new rules of competition including “economies of one” (Petrick and Simpson, 2013) and accelerating mass customisation (Jiang et al., 2017).

Thus, despite the potentially broad impacts of 3D printing and this emerging body of research, many important questions remain (Ford et al., 2016). In particular, three decades since the first 3D printers were sold, most of the business successes have been in low-volume niche markets. More compelling applications and use cases are needed if 3D printing is to cross the chasm, grow and become a mainstream technology (Moore, 2005).

This workshop will continue the trajectory begun four years earlier at the 2014 “The Business and Economic Impact of 3D Printing” workshop hosted by RTWH Aachen.

Challenges and opportunities for mainstream adoption of 3D printing

Interactions and interdependencies between digital and physical design collaboration

Impact of 3D printing in the R&D-manufacturing interface

Impacts of rapid prototyping tools on NPD teams and organizations

Policies for promotion and use of 3D printing

Challenges to organizational theories in a world of ubiquitous digital fabrication