« News archives
The Observatory for Responsible Innovation and Underwater Noise 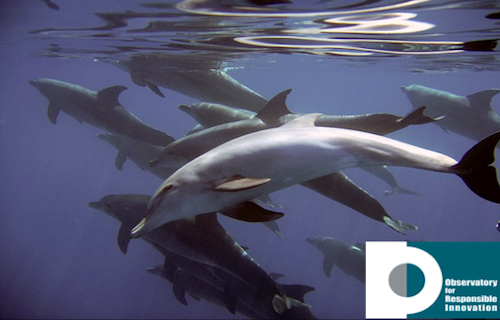 The Observatory for Responsible Innovation (Observatoire pour l'innovation responsable) was founded in 2010 at Mines ParisTech with a political ambition: "political" not in the sense of activist partisanship or a governmental approach, but rather with the idea of facilitating collective debate on the dangers and opportunities that characterize our innovation culture (perhaps even our innovation hubris).

A hot topic to begin with: financial innovation

From renewable energy to radio-frequency

Further thematic foci followed: on renewable energy in the built environment (2012-2013) and on radio-frequency identification (2013-2014). Benefiting from i3's supple institutional environment, and relying on the human and financial support of its home institutions (Mines ParisTech, Telecom ParisTech, Ecole Polytechnique), the Observatory contributed to constructive debate with stakeholders on a number of pressing issues.

The Observatory's latest work to date is on the problems of underwater noise pollution. Although the issue of submarine noise has hitherto received less media attention than those of plastic or ocean acidification, it has now become a management concern. There is no synthetic scientific study on the effects of human-caused noises on the different species living in the oceans. The marine mammals who communicate with each other via sounds for hunting and breeding and whose behavior can be altered by the ambient noise, spring immediately to mind. The stranding of cetaceans has been related to the use of military and civil sonars. But recent studies have shown that species such as giant squids that do not perceive noise can also sustain damage. The problem is thus more serious than suspected, and there are strong indications that it is worsening.

Technical solutions do exist, but regulation and incentive systems are needed

Its management includes the development of relatively simple but reliable and usable measurement systems. It also implies the deployment of techniques that already exist in the three main industrial fields concerned, petroleum industry, renewable energy (marine wind turbines) and navigation. Regulation and incentive systems are necessary for these techniques to be rapidly implemented. To manage the problem multiple actors have to share knowledge and develop solutions collectively.

An international conference organized by the Observatory for Responsible Innovation of the Interdisciplinary Institute for Innovation (i3-UMR 9217) took place on September 20, 2016 at the Maison des Océans in Paris, gathering researchers, industrialists and regulators. As an outcome of this conference — which had been preceded by three workshops (on noise-measurement, on the noise impacts on submarine life, and on the existing techniques and possible regulations) —a position paper will soon be published.