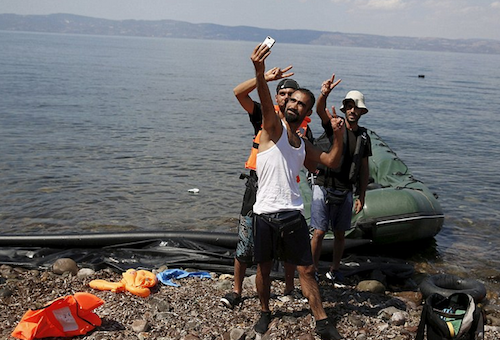 The phone is the only way to come here. (…) 99 percent you have to have a phone, and internet. Without it? You’re lost, you will die!’ (Syrian interview partner, 24 years)

More than one million refugees have arrived in Germany since last year. Along with their histories and dreams, almost all of them took one item with them: a smartphone. It has become indispensable before, during and after processes of forced migration.

The talk will present findings from an empirical study with refugees from Syria, Iraq and Afghanistan living in Berlin. They show that smartphones are digital tools which enable migrants’ self-organization and increased autonomy in a two-­fold way: During the process of migration they allow information seeking about the country/-ies of origin and arrival; they help in navigating specific routes, thereby avoiding dangers including police, border patrols and robbers; they aid in staying in touch not only with friends and families but with other migrants, creating ‘digital travel mates’; they can be a life saver through the emergency call function, e.g. at sea; and they provide autonomy from smugglers through creating a system of control vis-­à-­vis their prices and services on the one hand, and through being able to navigate land routes without them on the other.

These functions of self-organization and increased autonomy continue secondly after arrival: Smartphones enable learning a language; communicating with the help of GoogleTranslate; staying in touch with friends and family; organizing with other migrants against police and bureaucracy; they help in finding new ways of navigating the city and in return shape and alter (urban) space through specific migrant cartographies.

However, the state of being a “connected migrant” also has downsides to it: If life without a phone really is “like walking in the desert without water” (Syrian interview partner, 25, male), then information precarity as well as forms of digital deportability become imminent threats.

Dr. Sina Arnold is a research fellow and scientific managing director at the Berlin Institute for Integration and Migration Research (BIM) at Humboldt University (Berlin). She studied social anthropology, political science and education in Berlin and Manchester and received her PhD from the Center for Research on Antisemitism at Technical University Berlin in 2015.

Her work has focused on antisemitism, the comparative study of prejudice (particularly in postmigrant societies), on contemporary national identities as well as on social movements.

In the past year, she has explored logistics’ linkages to current migration and labour regimes, taught a year-long research-based seminar on « Migration and Logistics », and organized the international summer university “Investigating Logistics: Lifestyles, Migratoin, the Common(s)”.

Her most recent research project deals with digital migrant logistics, particularly the role of smartphones for Syrian refugees during and after the process of migration.

Stephan Oliver Görland is a lecturer and researcher for communication & media studies at the Institute for Media Research at the University of Rostock (IMF) and at the Berlin Institute for Integration and Migration Research (BIM).

He studied communication science, psychology, law and political science in Vienna from 2006-2011 and is now Ph.D candidate at Institute for Media Research at the University of Rostock.

His research topics are mobile media, organizing of time through media, migration and media use and research methods. Currently his research focuses on mobile media usage in on the go situations. Furthermore he works in the field of migration research, especially the smartphone use from Syrian refugees during the migration is the focal point of his research.