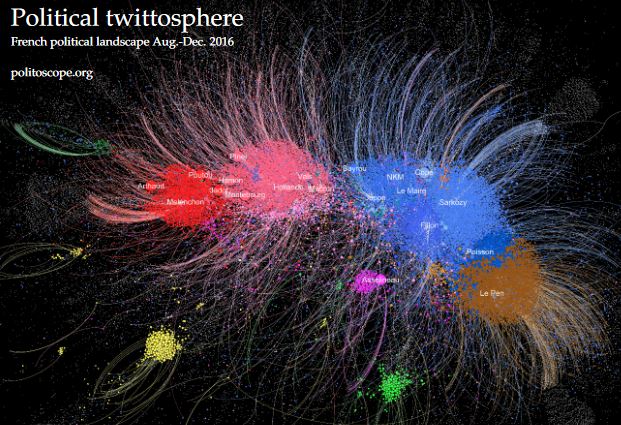 During the APeL seminar aimed at developing reflection on approaches to exploit usage data and online participation, David Chavalarias, researcher at CAMS, discusses the "making of" his research on the 2017 presidential elections with Noé Gaumont and Maziyar Panahi.

The researchers analyzed the flows of 3000 twitter accounts and counted the retweets without comment between twittos. This first method used, shows an approval of the content and the willingness to broadcast it.  These support networks shed light on the alliances formed and distances taken between the candidates. Over the same time

Before first round of elections

A candidate has at least three levers at his disposal to win the votes of voters: convincing them of the relevance of his programme and ideas (positive campaigning), convincing them of the inadequacy or danger of their opponents' programmes and ideas (negative campaigning), and finally, making their name and that of their party familiar to the public. Taking the example of the French presidential election (2017), we study how politicians use social networks to activate these levers and how these actions are linked to those of their online activist communities on Twitter. We propose a set of quantitative measures at different scales to qualify the processes at work within political communities and show that communities have distinct ways of articulating with their leader's strategies, pointing to a heterogeneity in the forms of militant "division of labour". We also show that variations in community strategies can identify temporary weaknesses or loss of confidence in a leader as well as the structural position of candidates in the political arena. We also identify an anomaly in the attitude of all candidates towards Marine Le Pen.

The seminar aims to develop current reflections about the use of digital data in the analysis of online practices and forms of participation. With the explosion of online communication, a richer and greater amount of information has become available to researchers to document practices in a variety of domains: consumption, political behavior, production of knowledge, sociability, democratic participation, controversy, etc. Evidence of practices and of communication occurring in these domains are now available on various media: forum, discussions lists, blogs, online press, social networks, dedicated exchange platforms, etc. Over the last few years, the use of these data for research purposes has become widespread but there is still little debate on the compilation of corpora, the methods of analysis and the articulation between digital analyses and more classical fieldwork in social science.

More on the seminar