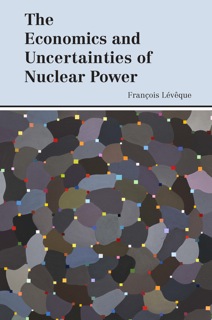 Un ouvrage de François Lévêque, paru chez Cambridge University Press. Vers le site de l'éditeur. Résumé: Is nuclear power a thing of the past or a technology for the future? Has it become too expensive and dangerous, or is it still competitive and sufficiently safe? Should emerging countries invest in it? Can we trust calculations of the probability of a major nuclear accident? In the face of divergent claims and contradictory facts, this book provides an in-depth and balanced economic analysis of the main controversies surrounding nuclear power. Without taking sides, it helps readers gain a better understanding of the uncertainties surrounding the costs, hazards, regulation and politics of nuclear power. Written several years on from the Fukushima Daiichi nuclear disaster of 2011, this is an important resource for students, researchers, energy professionals and concerned citizens wanting to engage with the continuing debate on the future of nuclear power and its place in international energy policy. Table des matières Introduction Part I. Estimating the Costs of Nuclear Power: Points of Reference, Sources of Uncertainty: 1. Adding up costs 2. The curse of rising cost 3. Nuclear power and its alternatives Part II. The Risk of a Major Nuclear Accident: Calculation and Perception of Probabilities: 4. Calculating risk 5. Perceived probabilities and aversion to disaster 6. The magic of Bayesian analysis Part III. Safety Regulation: An Analysis of the American, French and Japanese Cases: 7. Does nuclear safety need to be regulated? 8. The basic rules of regulation 9. What goal should be set for safety and how is it to be attained? Part IV. National Policies and International Governance: 10. Adopting nuclear power 11. Nuclear exit 12. Supranational governance: learning from Europe 13. International governance to combat proliferation politics and trade Conclusion Index.