« News archives
A special issue of Biosocieties on "Evidence-Based Activism" 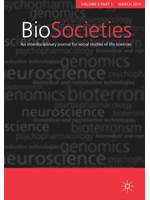 Coordinated by Vololona Rabeharisoa (CSI), Madeleine Akrich (CSI), and Tiago Moreira (Durham University), this special issue provides empirical data and analysis on what the authors call "evidence-based activism". This notion has been proposed to capture patients’ and health activists’ groups’ focus on knowledge production and knowledge mobilisation in the governance of health issues. The groups engaged in evidence-based activism articulate a variety of credentialed knowledge and ‘experiential knowledge’ with a view to explore concerned people’s situations, to make themselves part and parcel of the networks of expertise on their conditions in their national contexts, and to elaborate evidence on the issues they deem important to address both at an individual and at a collective level. In contrast to health movements which contest institutions from the outside, they work ‘from within’ to imagine new epistemic and political appraisal of their causes and conditions. ‘Evidence-based activism’ entails a collective inquiry associating patients/activists and specialists/professionals in the conjoint fabrics of scientific statements and political claims. From a conceptual standpoint, ‘evidence-based activism’ sheds light on the ongoing co-production of matters of fact and matters of concern in contemporary technological democracies. It includes the following papers:

From ‘politics of numbers’ to ‘politics of singularisation’: Patients’ activism and engagement in research on rare diseases in France and Portugal