« News archives
Racket in the Oceans 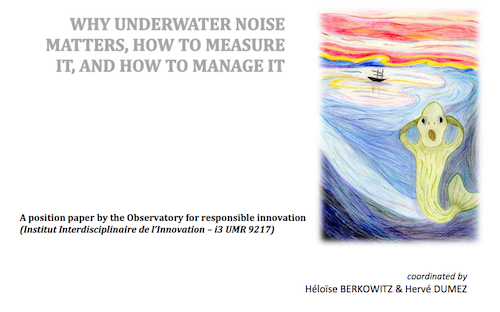 An Observatory for Responsible Innovation Policy report -, edited by Héloïse Berkowitz and Hervé Dumez based on the outcomes of a workshop series on ocean noise pollution and responsible innovation carried out in 2016.

From the Executive summary

This position paper is devoted to the problem of anthropogenic noise in the oceans, and is addressed to public and private decision makers. Underwater noise is recognized as a major problem for life in the oceans, which represent 70% of the surface of the earth. We shall develop four key points:

1- Although there is no synthetic and general knowledge regarding the impact of noise on all marine species, there is by now a reliable and consistent body of evidence that the problem is far more serious than had been suspected, and that it deteriorates from year to year. When discussing the effects of underwater noise, we think immediately of marine mammals, like whales and dolphins, which strongly rely on sound to communicate, forage and orientate. Noise can disrupt behaviors such as feeding or breeding. We now also know that intense anthropogenic sources have the potential to cause cetacean strandings. But some fishes also communicate through sound and, can be therefore deeply disturbed by noise.

Besides, studies have shown that animals that do not possess hearing organs, such as invertebrates, can also be permanently affected by exposure to noise, and eventually die as a consequence.

2- An indicator of noise disturbance is required to manage the problem. Though recognizing that there is no perfect measurement system, we must quickly establish a standardized, simple and reliable procedure. But while the European MSFD has provided Member States with guidelines on how to measure and report noise levels under Descriptor 11, there is so far no agreement on the noise disturbance indicators to be adopted. Uncertainties remain as to which species are affected in what circumstances and habitats, as well as concerning the role of specific sound source components in triggering damage to receptors.

3- Solutions to mitigate underwater noise from human activities are becoming available. Although all human activities at sea produce noise, it is generally agreed that Shipping, Oil and Gas E&P, and renewable energy operations are primarily concerned.

4- The central question for public and private decision-makers is how to change quickly and adapt the behavior of industrial stakeholders so as to reduce underwater noise. Regulations are needed at the state level, at the level of port authorities, and of authorities managing marine protected areas. Incentives and subsidies are probably necessary to help industries evolve and adopt available techniques.Underwater noise is a complex management problem because of its scale and the multiplicity of concerned actors. We must share knowledge and information, and map areas in terms of noise. We must also create institutions that bring different stakeholders together and are capable of devising both long-term and real-time solutions.

The first part of this position paper develops these four points. The second part outlines the scientific knowledge we have about the effects of underwater noise, the problem of noise measurement, readily available techniques to reduce noise or its effects, and cases of regulation. It aims at sketching the problem as it is understood today, and at supporting the efforts to be done by managing properly the stakes.”

To get the report