« News archives
Pierre Musso and the Network Society. From Saint-Simonianism to the Internet? 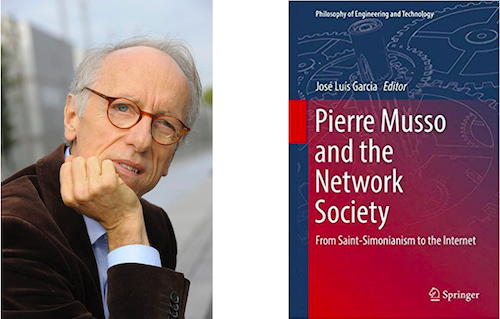 A book around Pierre Musso edited by José Luís Garcia.

This book is devoted to discussion of the views of Pierre Musso and starts with a central chapter written by Musso, entitled Network Ideology: from Saint-Simonianism to the Internet. Pierre Musso is a French philosopher and is one of the most original thinkers in the history of the network society. His thought develops a critique of information and communication technologies through their imaginary and social representations and of the information society, based on the network metaphor.

The main question on which Musso has focused his attention is how the network metaphor is one of the most powerful ways of understanding the complex societies in which we live. Showing characteristic attention to detail, and drawing on the history of ideas, political philosophy and sociology, Musso traces the genealogy of the network imaginary, and points out that it did not emerge with the Internet. He shows how its modern roots can be found in Henri de Saint-Simon and his disciples, engineers and entrepreneurs such as Michel de Chevalier, and Barthélemy Prosper Enfantin, who developed channel networks, railroads, and the telegraphic network in France in the nineteenth century. In addition to the central piece written by Musso, the book includes a general introduction and six commentaries from experts on information technologies and networks. It displays a wide range of perspectives from a diverse set of authors in terms of nationalities and universities, as well as disciplinary backgrounds.

To buy the book