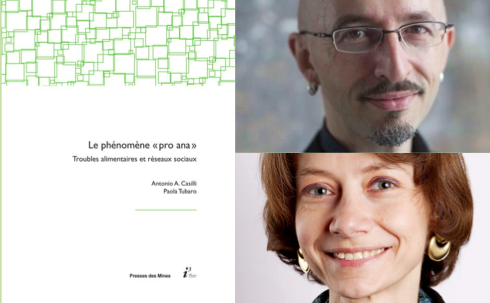 The journey of the 2015 Health Bill in the French Parliament was marked by disagreements, indicative of the deep crisis of the health system in a major Western democracy. A most controversial measure planned to outlaw the promotion of extreme thinness and to punish authors of so-called “pro-ana” websites with jail time and hefty fines. Backed by associations of parents and health professionals, sociologists Antonio Casilli and Paola Tubaro fought this measure, until it was removed from the final version of the law. The book The “Pro-ana” Phenomenon: Eating Disorders and Social Networks, just published by Presses des Mines (in French), tells their story ...

What are “pro-ana” websites?

Websites and online communities of persons with eating disorders portray pain and distress without filters. Users can go as far as to describe their crises, their vomiting and their desire for an impossibly thin body – thereby earning from the media a reputation for "promoting anorexia" (shortened as “pro-ana”).

“At first sight, banning these websites might seem a good idea,” says Antonio Casilli, member of the Interdisciplinary Institute of Innovation (i3) at CNRS, and associate professor at Paris Institute of Technology and at EHESS in Paris. “But the consequences can be disastrous: in order to survive, these communities will go underground, thus becoming impenetrable to outreach initiatives by associations and healthcare professionals.”

Paola Tubaro, research scientist at the Laboratory for Computer Science Research (LRI) of CNRS, recalls: “In our effort to raise awareness among MPs, the main challenge was to reject the common perception of the internet as a place of threats and horrors... we could build on five years of research, which we conducted with our team, studying online social networks of persons with eating disorders.”

The results provide an unanticipated image of these stigmatized communities. With one notable surprise: the culprit is not internet’s tendency to unbridle speech, but the shortcomings of health systems in Western countries.

What if the true culprit were the cut in public health spending?

According to internet users surveyed by the authors of The “Pro-ana” Phenomenon, joining online communities centred on eating disorders is a way to address, as much as possible, the perceived shortcomings of the health system. Their online presence is all the more remarkable for those who live in “medical deserts” with more than an hour drive to the nearest healthcare facility.

A new picture emerges: “pro-ana” is less a form of internet deviance than a sign of a more general transformation of how we experience health. “With systematically underfunded health systems and cuts in public health budgets,” explains Antonio Casilli, “we all face the injunction to be 'active patients', informed and proactive. But the ensuing social pressure may cause paradoxical and risky behaviours.”

Members of the web communities labelled as “pro-ana” do not always aim to counter medical norms. Rather, they seek support for everyday life, after and beyond hospitalisation. These websites offer them an additional space for socialisation, where they form bonds of solidarity and mutual aid.

The solution, then, is not prison but strengthened provision of care. To do this, says Paola Tubaro, “Digital tools themselves can be exploited, especially by associations and health professionals, to offer complementary forms of support.”

A niche phenomenon with wider repercussions

In France, according to estimates by the professional association AFDAS-TCA, 600,000 people live with an eating disorder. The consequences are devastating: in particular, anorexia nervosa leads to the premature death of about 20% of those affected. Adolescent girls and young women are the most concerned, with increasing incidence among young men.

“Pro-ana” communities are not only an expression of these situation, but a prism through which broader issues can be apprehended: our present obsession with body image, our changing relationships with medical authorities, the crisis and deficit of our publich health systems, as well as the growing restrictions to our freedom of expression online.

Also, the “pro-ana” phenomenon reveals the difficulty of Western policymakers to come up with solutions to social and technological changes that slip dangerously from their grasp. Both authors agree: instead of seeing the “pro-ana” as problematic speech that should be silenced, we should think harder about the underlying social tensions that internet has helped bring to the surface.

This book is based on the results of the research project ANAMIA, funded by the French National Research Agency (grant #ANR-09-ALIA-001).

An excerpt of the book (in French) is available in .pdf format.

Antonio A. Casilli, is an associate professor at The Telecommunication College of the Paris Institute of Technology (Télécom Paristech) and a research fellow at the EHESS, Paris. He is a member of the Interdisciplinary Institute of Innovation (i3) of the French CNRS. Among his books: Digital relationships [Les liaisons numériques] (Seuil 2010) and What is digital labor? [Qu’est-ce que le digital labor?] (INA 2015). His website, Twitter: @AntonioCasilli

Paola Tubaro, is a senior research scientist at the Laboratory for Computer Science Research (LRI) of the French CNRS. She teaches sociology of social networks at ENS, Paris, and is a visiting professor at the University of Greenwich, London. She has published in journals such as Social Networks, Revue Française de Sociologie, Sociological Research Online, Sociology. Her website, Twitter: @ptubaro