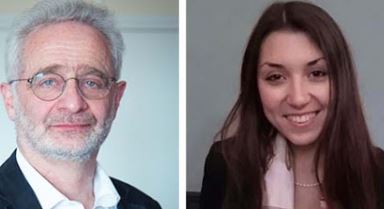 Liberated enterprise is an attractive but ill-defined concept. Whether or not they refer to this model, many organizations want to encourage the rise of autonomy and employee participation, while guaranteeing the effectiveness of collective action.

The book "Beyond the liberated company, an investigation into autonomy and its constraints" by Thierry Weil and Anne-Sophie Dubey, is based on an in-depth survey of a dozen organizations that are very diverse in size and nature. It analyzes the multiplicity of practices and identifies points of vigilance for managers who wish to launch a process of empowerment for their employees.

The round table "what new role for management ? "led by Anne-Sophie Dubey* brought together Jean-Yves Bonnefond, a teacher-researcher at the CNAM, Aliette Mousnier Lompré, Director of CSO Orange Business and Matthieu Batistelli, a doctoral student at the Polytechnique. During this meeting, the speakers shared their analysis and noted the difficulties encountered by management in setting up the "liberated company".

Jean-Yves Bonnefond enseignant chercheur in occupational psychology at the CNAM.

The occupational psychology team intervened at the request of Renault management in 2010 following the deadlock in social dialogue at the highest level of the company on the assessment of quality and health-related work situations at the Flins plant. The research team proposed to experiment with an institution of dialogue on the quality of work in the company between management, trade unions and operational staff. "The experimental model has been successful despite the passage of three operational general managers at the national level and three Flins plant managers. The decision to move to a more horizontal model is still a management decision," explains the researcher. "When there's a management problem, it's management that's bad. This has led management to understand that problems are not only solved by the hierarchy but also by the field. The employees who make people do things know how to do them. The manager sometimes needs to step aside. In Flins, the organisation is based on a completely original system.  The workers elect their referent, and more than a hundred job referents have been elected by their peers. This elected referent function establishes the function of the labour collective as a means of action in the organisation. The process includes the inventory of problems and opportunities, prioritization, discussion, decision, validation and control of the system. The referents can intervene at all levels and make people understand that problems sometimes come from the organization decided by the management and not from the workshop" he explains.

Aliette Mousnier Lompré, Senior Vice President Customer Services & Operations at Orange Business Services She was appointed Vice President Global Enterprise Networks in November 2016. Since July 2019, she has been Senior Vice President Customer Services & Operations at Orange Business Services. "I joined a highly technical team (400 people in 25 countries). At the first euro spent, I had to validate even though I knew nothing about it. Validation meetings are organized based on the following model, a knowing that exposes to four managers who will have to validate. For me, this organisation is neither satisfactory nor efficient. Three years later, I no longer make operational decisions. I am in charge of strategy but also of role allocation. I have therefore entrusted operational decisions to certain operational staff. To give them autonomy, I had to agree to allocate time to transformation. In meetings even when I was sure I was right, I kept quiet and listened to the exchanges and the decision-making process. Thus the change towards autonomy could take place. The employees welcomed the transformations from the moment I was very clear about the rules of the game and what could and could not be done," she explains.

Matthieu Battistelli is a PhD student at i3-CRG. "I carried out part of my thesis work on the contrasting contributions of holocracy to deliberative democracy in companies by studying the case of Mobil Wood, an SME in the Yonne. The company offers shopfitting solutions in solid wood mainly for organic food stores. In April 2016, the two managers of the company decided, after consultation with the employees, to move the firm towards a holocratic operation. Holocracy is both a "code" compiling good practices of self-organization and a "social technology" with the promise of democratizing organizations while making them efficient. Matthieu Battistelli adds: "Very quickly, they realize that the model does not work.  Work is lagging behind and employees are not taking ownership of the model at the same speed. A lot of overtime is needed to catch up. So, to reinforce change management, managers train for 12 to 18 months in coaching and have employees trained in coaching. They then appoint, in conjunction with the employees, two leader-coaches in each team. Their mission is to accompany employees towards greater autonomy while assuming the traditional roles of managers. It is therefore difficult for them to oscillate between a position of authority and a position of support... This function of coach-manager is formalized in the structure of the company. It is an adaptation to the original prescriptions of the holacraitepartnership model since the company had to "soften" its transformation".

Anne-Sophie Dubey : "Is it possible to change? to go from a classic model to a "liberated company"?

Aliette Mousnier-Lompré : "I also agreed to make changes little by little so as not to disrupt the business. The way I presented the changes to my management was pragmatic. I didn't put forward a new organization of the company but concrete changes that I could argue. Changes that were too rapid and too brutal would have risked disorganizing the company and compromising the expected performance results".

Matthieu Battistelli :"Today's leaders feel that they wanted to change the model too quickly and are continuing the transition in a smooth manner. Some employees have even left, a little bewildered by the change. Some managers have been very critical because they feel they have lost their place in a system that is now more horizontal. On the other hand, this new management mode has attracted talent, and some executives interested in this new mode of governance have joined the company.

Anne-Sophie Dubey : Are there any conflicts emerging from this new organization? »

Aliette Mousnier-Lompré : "Hidden conflicts emerged when I gave assignments to certain managers. Others felt cheated and expressed resentment. They accepted the division of labour as long as it was pyramidal. You have to know how to deal with this type of situation".

For more information on the organization of this conference :

This conference on February 26th gave rise to the presentation of the books Libérer l'entreprise, ça marche? edited by Laurent Karsenty (Octarès Editions, November 2019) and Au-delà de l'entreprise libérée. Enquête sur l'autonomie et ses contraintes by Thierry Weil and Anne-Sophie Dubey (Presses des Mines, January 2020) during two round tables: "How to move towards autonomy? "and "what new role for management".

The co-organizers of the conference are :